Walk from the Refuge Carducci to the Maria pass following the path n°107. From the pass, instead of going down 350 meters to the old path, turn right and climb up for about 5 meters to find the start of the new equipped path. The fixed ropes indicate the direction, after a few minutes you’ll see a small bridge. Continue along a ledge with a slightly complicated and exposed passage and then carry on horizontally completing the whole south-east wall of the Maria peak, coming, among ledges and small canyons, to the south wall. Walk uphill for a bit and then down direction south-west through a large and steep meadow.

Once arrived at a large gravelly ditch (pay attention in the event of heavy rain) descend until you reach the ledge that crosses the overhanging south face of Punta Maria. At the end, the ledge turns to the right and, with a slight climb, it leads to the key passage of the via ferrata.

The ledge narrows and the roof becomes lower and lower. You can pass by going out on the cliff putting your feet on small but safe steps and then returning to the ledge. You cross another small canyon (be careful in case of heavy rain) and continue to the ledge. After a climb through cliffs you arrive in the great notch that divides the Maria tip from the Witzenmann summit.

Here we find the most spectacular part of the route: a suspended 14-meter long Tibetan bridge. After a short climb up the rock and on the last ledge, we reach the end of the via ferrata exactly on the scree below the Vicenza tower where last spring a big landslide happened. Like last summer, we will put the climbing route in safety with climbing ropes. Furthermore, we will always give you correct and accurate information on the situation of the landslide.

Traces of a trail will lead you from here to rejoining the old path n. 107 that will take you to the bivouac De Toni and the forcella dell’Agnello (the Lamb pass). 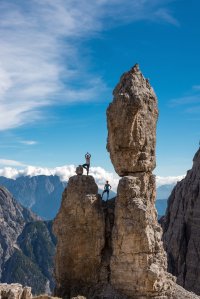 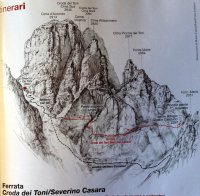